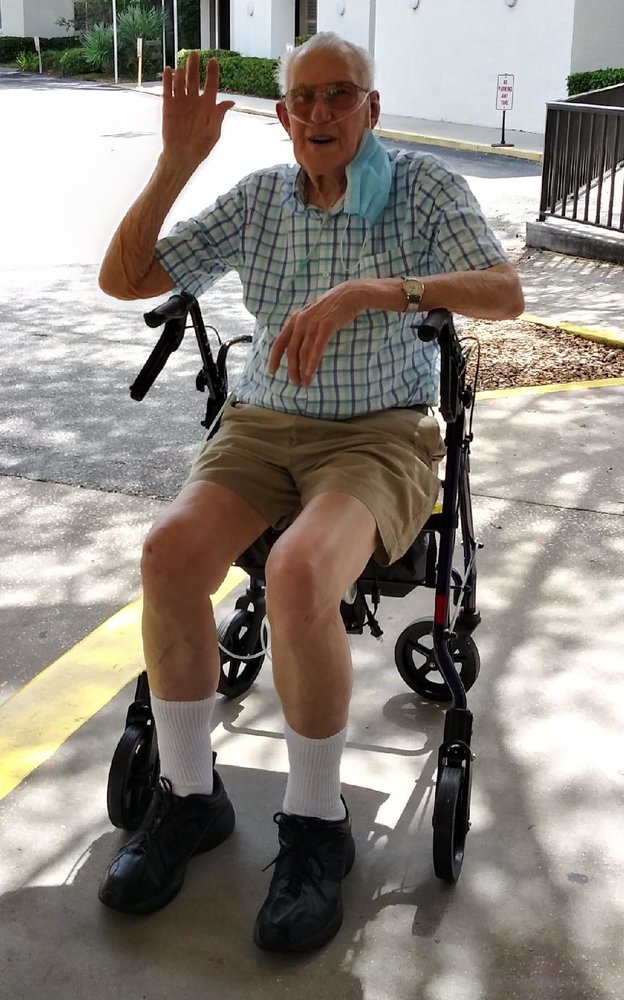 Please share a memory of Charles to include in a keepsake book for family and friends.
View Tribute Book
Charles (Charlie) R Mecking September 12, 1932 – January 18, 2021 Charles (Charlie) Richard Mecking, of Deland, FL, passed away on Monday morning, January 18, 2021, at John Knox Majestic Oaks, Orange City, FL. Charlie was born on September 12, 1932, to Charles and Marie (Hammele) Mecking in Merrick, NY. In addition to his parents, he was predeceased by granddaughter, Emily Mecking, of Middletown, NY; his wife of 60 years, Arlene “Pat” (Trabold) Mecking, Deland FL; and his little sister, Virginia “Ginny” Hennig, of Pine Bush, NY. Charles graduated from Wellington C Mepham High School, in North Bellmore, NY and after entering the US Army in 1953, he studied automotive and diesel at the State University at Farmingdale, NY. After college, Charlie met Pat through mutual friends and on a date at her house, he won Pat, her mother and sister over with his homemade apple pie. They married in Throggs Neck, NY, on May 18, 1958. The young couple spent a year in Cincinnati, OH, and eventually raised their family on Hennig Lane in Pine Bush for 34 years. He is a former volunteer fireman with the Pine Bush Hook & Ladder Company and was foreman at Wickes Lumber Co, Inc., Walden, NY. He was also a former Deacon at Graham’s United Presbyterian Church, Pine Bush, NY. Charlie was a handyman and was highly in demand for his engineer-like thinking through the years. He was always fixing or building projects throughout his life; he even took up plastic canvas again at age 88. He was ahead the conservation movement as he built a solar cooker out of cardboard and tin foil in the 1970s (frying eggs in the sun). He also built from scratch an adapted fireplace insert (woodstove) in the 1980s. After retiring from Pine Bush Central School District in 1994, he and Pat moved to Wildwood, FL. They spent 26 years enjoying their “little ranch house in the south.” Pat and Charlie moved to DeLand in 2015 as Pat’s health was failing and to move closer to family. Unfortunately, he lost Pat in October 2018. Charles is survived by his three children; Karen Wixson (Jeff); of Deltona FL, Kenneth (Michele) Mecking of Middletown, NY; and Christine Bedell of Deland FL; six grandsons and 1 great grandson; his wonderful sister-in-law Nancy Perry; and devoted brother-in-law William Hennig; and several nieces and nephews. Many thanks go to the nursing staff at Majestic Oaks and Woodland Towers who took exceptional good care of him. Arrangements are entrusted to William M. Gagan Funeral Home Inc., 1525 Burlingham Road, County Road 7, Pine Bush, NY 12566. Services to honor his memory will on May 18, 2021 at 1 pm at William M Gagan Funeral Home, with interment to immediately follow at New Prospect Cemetery, Pine Bush, New York. To leave an online condolence, please visit www.wmgaganfuneralhome.com
Tuesday
18
May

Look inside to read what others have shared
Family and friends are coming together online to create a special keepsake. Every memory left on the online obituary will be automatically included in this book.
View Tribute Book
Share Your Memory of
Charles
Upload Your Memory View All Memories
Be the first to upload a memory!
Share A Memory
Plant a Tree