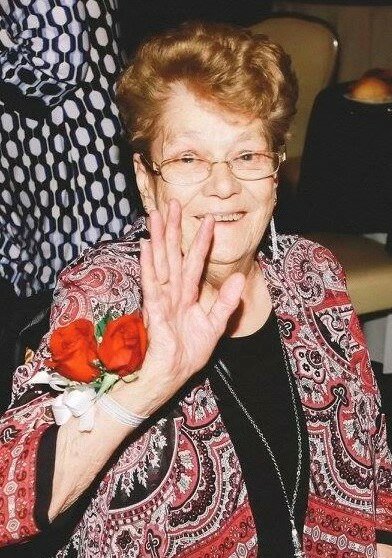 Obituary of Joan B. Henry

Please share a memory of Joan to include in a keepsake book for family and friends.
View Tribute Book
Joan B. Henry Middletown, NY Joan B. Henry, resident of Middletown NY, sadly passed away on March 17, 2022. She was 84 years old. The daughter of the late Clarence E. Smedes and Elizabeth Vernol, she was born on August 5, 1937, in Goshen, NY. She graduated from Pine Bush High School, and later retired from the Times Herald Record. Joan was a mother of six, a grandmother and great grandmother to many. She was a loving and compassionate woman, who was always ready for a good time. Joan loved to attend community events, parades, and penny socials. Social gatherings were her absolute favorite. She was a very strong and independent woman, and welcomed all she encountered. Survivors include her daughter Barbara Conklin and her husband Bill, her son Walter Henry and his companion Cindy, son David Henry and his wife Colleen, her daughter Betty Jo Stone and her husband Steve, and son Dwayne Henry and his companion Charlotte. She is also survived by her brother George Smedes and sister Ana Mae Yates, along with her many grandchildren and great grandchildren, nieces and nephews. Joan is predeceased by her husband, Walter Henry Sr, partner, James Haskin, her son Robert “Bobby” Henry, her brother George Smedes, and sister Betty Hay. Visitation will be held on Wednesday March 23, 2022, from 4pm-8pm at the William M. Gagan Funeral Home Inc.1525 Burlingham Rd Pine Bush NY. Funeral service will be held on Thursday, March 24, 2022, at 11am at the funeral home followed by a burial in the New Prospect Cemetery in Pine Bush, NY. To leave an online condolence please visit www.wmgaganfuneralhome.com
Wednesday
23
March