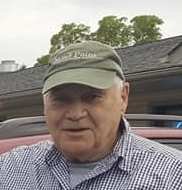 Please share a memory of Daniel to include in a keepsake book for family and friends.
View Tribute Book
Daniel C. Jansen Pine Bush, NY Daniel C. Jansen a line worker for Ford Motor Company, until his retirement, and lifelong resident of the area, passed away on April 7, 2020 at Kaplan Family Hospice in Newburgh. He was 89. The son of the late John R. Jansen and Blanche Meeker Jansen, he was born on April 1, 1931 in Goshen, NY. Daniel enlisted in the US Army in 1951, and was stationed in Kokura Japan in the motor pool. He would never say he was a war hero or go to the wall because he said he was not in a war zone. Daniel was honorably discharged in 1954. He was a diehard dirt racing fan. The Orange County Speedway in Middletown was his home track. He loved traveling to all other dirt tracks to watch the races. He went up and down the East coast following them. Daniel also loved watching NASCAR on tv. He loved taking rides and finding places and roads he had never been on, going to all kinds of classic car shows, and was a member of the Skulls car club. Daniel’s most favorite thing was going to McDonalds everyday meeting up with his friends and having coffee. Survivors include his wife Stephanie J. Jansen of Pine Bush, daughter, Linda Jansen English of South Carolina, son Robert Jansen and his wife Diana of Pine Bush, son, John R. Jansen and his wife Cheryl of Virginia Beach, 4 grandchildren, Jessica Jansen of New Paltz, Danielle Wilson of Pine Bush, John R. Jansen II and Elise Jansen of Virginia Beach, 13 great grandchildren, brother Lawrence Meeker, and also many cousins and friends he left behind. Daniel was predeceased by his parents, John and Blanche Jansen, sister, Suzanne Holze , brother John R. Jansen, and his first born granddaughter, Jayme Tate. With following Dan’s wishes there will be no services. A memorial service may be held at a later date. Memorial donations in Dan’s name can be made to Hospice of Orange and Sullivan Counties 800 Stony Brook Ct Newburgh, NY 12550. To leave an online condolence please visit www.wmgaganfuneralhome.com

A Memorial Tree was planted for Daniel
We are deeply sorry for your loss ~ the staff at William M. Gagan Funeral Home
Join in honoring their life - plant a memorial tree
Share Your Memory of
Daniel
Upload Your Memory View All Memories
Be the first to upload a memory!
Share A Memory
Plant a Tree